Last Week: A tribe split was in the cards, James fell for Noelle’s bluff, and Ryan now has more time to go fish.

Alright, let’s take a look at the tribe as it currently stands…

Lucy has some explaining to do as the tribes make like the Spice Girls and two become one. Karla admits that Sami tipped her off so she could vote the right way, but she’s very frustrated because this is the first time someone has tried to keep her in the dark.

Jesse is on cloud nine having Ryan and James gone and now knows where all of the advantages are. He even knows that Karla has an idol which is amazing considering I asked Dwight and James if they knew and they both said that it was a mystery.

Reward Challenge Time: The players will spin on a weird contraption that will pull a buoy toward them. Once their buoy crosses a line, they’ll race across an obstacle course and retrieve a sandbag. They’ll then try to throw the sandbag to the top of a pole. The first person to complete this feat will be taken to “The Sanctuary” for a sleepover where they’ll enjoy pizza, cheesecake, brownies, beer, and wine.

Results: Noelle was having real problems with the balance beam. But, she kept at it and eventually made it across and was able to win the challenge. I can’t emphasize how far back she was while everyone else was already tossing their sandbags. Rock…star.

Twist: Probst lets Noelle know that she’ll also be getting a letter from home and that she can invite three people to come along. She chooses Sami, Jesse, and Owen.

Greetings from “The Sanctuary”

Wow, the Sanctuary is just a luxurious hut with some sweet hammocks. Works for me.

Owen gets very emotional while reading his letter from home, with his girlfriend making a prediction that he could win an immunity necklace. Whoa…she needs to send me some lottery numbers.

Jesse’s kids are a little more to the point saying, “Get that money, baby!” Adorable.

Sami kicks off the strategy discussion, saying that he wants Cassidy to go next because he’s done flipping. Owen has the idea to split the votes between Cassidy and Karla in case Karla has an idol.

Noelle is a little concerned that Karla and Cassidy are back at camp saying her name.

CUT TO: Back at camp where nobody is saying Cassidy’s name. Huh…

In fact, it seems like Owen is on the chopping block next, with Cody saying Owen is Noelle’s new Dwight.

Cassidy and Cody go for a little walk with Cassidy wanting to start taking out the big names, Noelle in particular. There it is!

Gabler wants to wait to see who wins immunity before deciding who to target next. That’s not a bad strategy when you’re in the middle.

Immunity Challenge Time: The players will hold onto a handle that steadies a platform. They’ll use thin blocks to build a house of cards. The first person to stack the cards high enough to reach the finish mark wins immunity.

Result: It’s close between Noelle, Sami, and Cassidy with Cassidy picking up her first immunity win.

Noelle is trying to figure out what to do now that Cassidy is safe and Karla is potentially packing an idol. To add to the urgency, Gabler lets her know that she’s a target.

Jesse has done a 180 from the Sanctuary, saying that at first he was grateful that Noelle let him read his letter from home. But now, that letter has encouraged him to do what’s best for his family, even if that means getting rid of Noelle.

Jesse and Cody have a chat, with both agreeing that Noelle should go next.

From there, Jesse shares a fascinating checklist for how to blindside someone.

Normally I’d be concerned with someone being so confident. But, Jesse is a champ.

And no sooner do I say that, than Gabler starts talking to Karla about how much power Jesse and Cody seem to have.

Is it because everyone gets along so well? Do we need to send Corinne Kaplan out there? 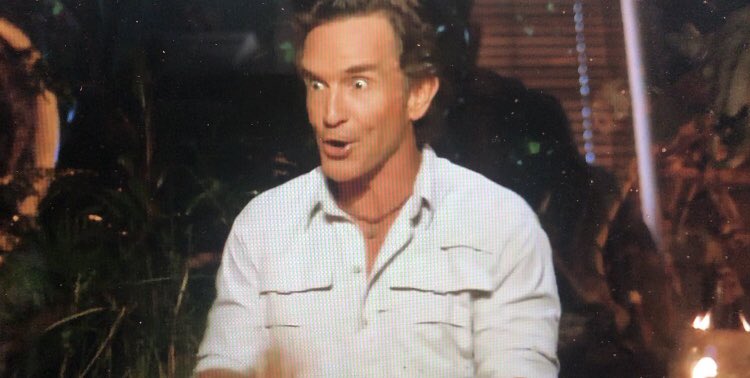 Voting Time: Owen votes for Karla, Jesse votes for Noelle, and the rest of the votes are lost to the magic of editing.

Noelle hugs everyone on the way out, with Jesse admitting that he had to do it.

Verdict: I’ll say it; I like my “Survivor” with a little more emotional tension. Everyone’s best buds and hugs when it’s over. Where have you gone, Randy Bailey?

Also, are we cool with three idols left in the game at final seven?

That being said, I’m fine with any of the final seven winning this thing. Which is always a good place to be.

Any Questions? Drop me a line on Twitter: @GordonHolmes